There are three mini-games, The Guard Barracks, The Ingress Chamber, and the Frozen Alcove.  Once you enter an area, the moment you clear the loot you gain the associated bonus of that mini game. however, each game also includes a possible curse.

NOTE: For all 3 minigames, I recommend Runic Cheese, Quartz Active, and your best Rift charms to get the bonuses.

First up is the most important one, the Guard Barracks.  This one clears away the Paladins for the entire run through to Acolyte.  In order to avoid the curse, though, you need to catch a Paladin within six hunts. Once you catch him, the meter resets back to zero, and you've got six more hunts to find (and catch!) the paladin once again.  If you manage to get all 40 loot before going six hunts, you've won.    The curse, though...is bad. If you get cursed, your luck will plummet like a rock and you'll have to rely on your traps' Power to catch mice.    The only way to clear this curse is to find a Silence Chamber. (Use Shuffles if you have to!)  A quick ten loot later and you're back in the green with luck restored.

One item you'll want to pick up as soon as possible is the RiftStalker Codex. Simply owning this will double the luck of any Rift Set you currently have armed. Very handy!  It's purchased at the general store for some gold and a Clockwork Cog.

There are two basic potions you'll pick up in the normal course of playing, the Ancient String Cheese potion and the Runic String Cheese potion, both of which do exactly what you'd expect.  Both of these are available in the store for a cost of gold and sprockets.

Also available to purchase in the general store is more Quantum Quartz (or loot drops), but also a Portal Scrambler, which will shuffle the portals in case you're looking for a specific one.  There's also a Portal Rekindling Key, if one gets Frozen and you can't find a furnace.

Lastly, of rare find, is the TimeSplit Rune. These can be bought on the market, in the store, or most commonly found in Acolyte loot drops and chests. (Be sure to have the frozen zone cleared to benefit!)

NOTES ON SPECIAL MICE:
​
Skeletal Champion can be avoided by arming an Anti-Skele charm

Portal Paladin is present most everywhere, and will show up more frequently if you fail the Ingress curse.  Once the curse is cleared, he goes away from all chambers.

Portal Pursuer will start following you when you’ve failed the Ingress game.Chamber Cleaver is a tricky guy. He shows up only with Runic, and only when about 20% of the loot is done.

When you first arrive in the area, you'll be standing at the Entrance.  Go ahead, click it and walk through the portal and enter directly into the first area, the GearWorks.

Each of the 12 different areas works essentially the same, where the Loot Counter starts filled, and as you hunt the counter will drop. When it hits zero, new portals will arrive and you can travel to a new area.  (One exception being the Chamber Cleaver, which will open portals early...but you can keep hunting loot if you want to.)

The portals are gathered into three main sections.  I call these sections, General,  MiniGame, and End-Game.

Using Gearworks To Explain the System:

You’ll always start here, and you need to collect all the loot the Gearworks has to offer, which is 25.  The more loot you get, the more likely the Chamber Cleaver will show up.

25 Loot: “The Chamber is too cramped for the Chamber Cleaver Mouse to come around.”

16 Loot: “The Chamber Cleaver Mouse is available to catch with Runic String Cheese!”

Each time you get a drop of a sprocket, the counter goes down that amount.  Spending that loot will not change the counter.  As you catch more loot, the little graphic of the Cleaver mouse begins to show, and the message will change.   What the cleaver does is allow the Portals to open sooner...something that can be very useful if you’re in a tight spot after the Barracks.

NOTE:  Theme Scraps, Treasure Clues, and other ‘non rift loot’ (such as simple orbs) do not count towards your progression in an area.

Here is a good spot to mention the Acolyte loot.  Just as the original Acolyte drops a Mysterious Box, the rifts Absolute Acolyte will drop a Mysterious Rift Box.  However...he has lots of loot to share.

Catches 1 through 9, he drops a Mysterious Rift Box:      LOOT HERE 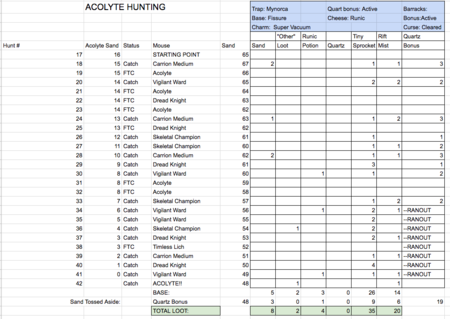 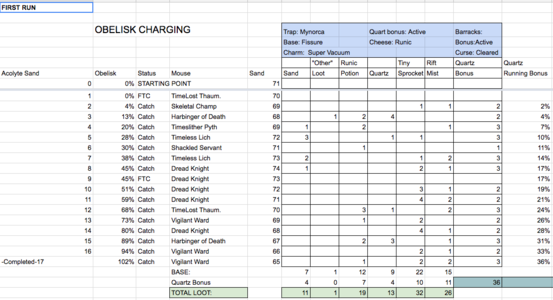 Here's what it looks like on mobile, while in the GearWorks, and when looking at new portal selections. 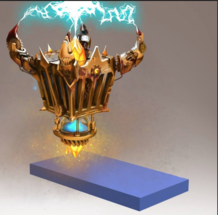 The final two chambers are the Timewarp Chamber and the Acolyte Chamber.  Use Runic String only in these two areas.  Your first time in the TimeWarp, and your first catch of a Chrono Mouse, he'll drop an Hourglass.  After that, various catches in this chamber will give you Sand as a loot drop.  Once you've gotten at least 40 sand and 50 runic cheese left, then you can go into the Acolyte Chamber.  (These are my suggestions. Go in whenever you personally feel ready.)

CHARMS:  Some older rift charms are for sale in the store for the cost of some loot drops to boost your gameplay, as part of the RiftWalker setup.  The only one worth mentioning is the TimeSplit Charm, which takes 1 TimeSplit Rune.  It will be hard to get, but at 3,000 power and 25% power bonus makes it second only to the Ultimate Charm.

(Side note:  I keep forgetting this is where we get the Realm Ripper charm. Mighty useful when doing Season Five maps!)

Once you're in the Acolyte Chamber, this is a two-step process.  Note that you can retreat ANY time you want, and your progress will stay right where it is waiting for you to come back.  If you run out of sand, you'll be kicked out, and your progress will stay. Note that the Acolyte himself will show up whenever he feels like it, and you can't do a thing about it. He's invincible until the sand is all cleared. (Keep reading.)

LEFT SIDE:  This is your sand, in light blue. You'll see the center gears start at 0%. With each hunt, your sand drops by one, and the purple Acolyte sand will rise by one.  The gears will rise by whatever Rift Loot you get. Here is a good place to use your Quartz.  Once the gears reach 100%, the Purple sand will stop being stolen.  Instead, now you are stealing his sand.

Once you've stolen all the purple Acolyte Sand, only then will you *finally* be able to catch the Acolyte himself.  He's pretty easy to catch once his shields are gone, so arm your quartz and a good wealth charm, and you'll be set.

Many of the mice have roman numbers in their artwork, which were commonly used on clock-faces, signifying time: 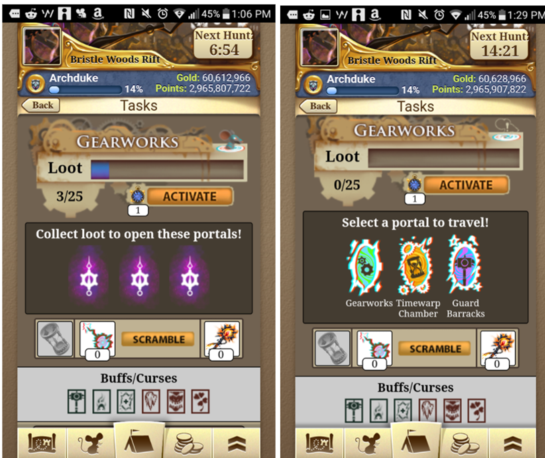 A unique item in the Trapsmith called the Riftstalker Codex is a must-buy as soon as you can. It takes one Clockwork Cog, but  it doubles the bonuses on a Riftwalker set of Trap/Charm/Base.

Clockwork Base (Rift Base):   800 Power, 13 Luck.  It’ requires the Fissure base, so be sure you have that one first.  If you don’t have it, get it from the WRift Trapsmith. It will also take 25 Clockwork Cogs and 1 Timesplit Rune.

There are 20 new mice in this area, all of which require some kind of string cheese.  They are all encountered in different areas. Check out the handy chart below (created by Jack Smith, original link here ) for where you can find each mouse, and what cheese is needed. That first number is the attraction rate, followed by the cheese.    For example, the Dread Knight is best caught in the Gearworks, with a 40% chance while using Ancient String or Runic String. 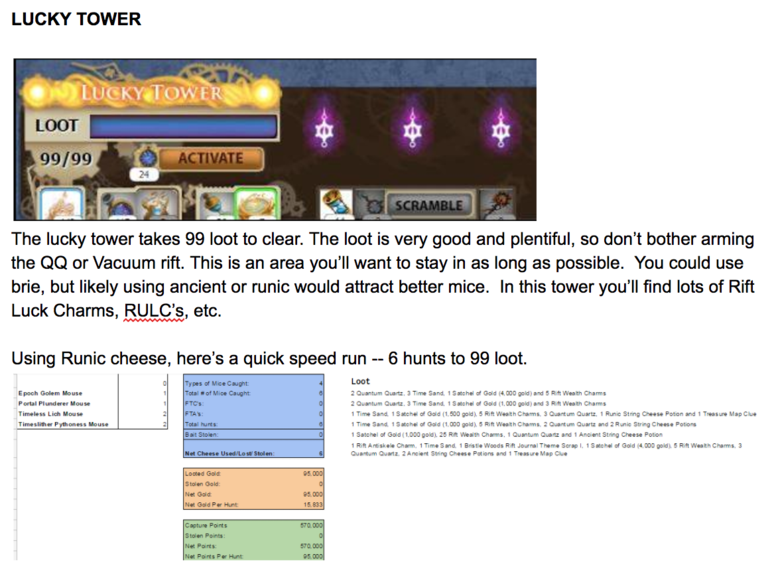 The last room we have is the Ingress Chamber.  This area is a "take it or leave it" area. Clearing it will reward you with a fourth portal each round, which can be handy if you're seeking a specific chamber. However, to fail means you get pursued by the Portal Pursuer everywhere you go, in every chamber, which is REALLY annoying.  The only way to get rid of him is to find and clear a Pursuer Mousoleum.

Next in importance is the Frozen Alcove.  (Old picture shows original 50. Changes made bring this down to 35 loot required.  With each hunt in the alcove, it gets a little bit colder. You've got 15 hunts to get 35 loot, or you'll get cursed and one of your portals will freeze over. A pain, but can be survived if you wanted.  The bonus, though, is worth it.  The Absolute Acolyte normally just drops gold, but by clearing this portal, The Acolyte will drop 3-4 extra loot, which could include the elusive TimeSplit rune.     (Note: If you do get frozen, the two options are either find a Furnace Room, or buy a kindling key from the store...but the key only works for one rotation, so it's not really worth it to me.)

Just travel to the new area, but you must be a Grand Duke to get in, and have the Rift Detector!  If you don’t have the detector, it’s purchased from the Living Garden cartographer.   Once you're in, you'll travel through several portals until you eventually find your way into the Acolyte Chamber.

As we learn more about this area, we'll have people that want to Gold the Acolyte just to get the chest. To do this, we need to find the most efficient way to get there.  While at a MINIMUM you'll need to clear the Guard Barracks (to remove the paladins), it's also recommended if you find one then be sure to clear the Frozen area as well (to get the bonus loot.)

You'll find that if you arm Quartz on the way up, you'll get a nice supply of TimeSplit Sand and Runic Potions.  It's very conceivable that you can start a run with only 30 Runic Cheese and 30 Sand, and you still could finish it.   However, since these loot drops are never guaranteed, my recommendation is you have at lease 50 cheese, and 40 sand....to be safe.

Here is my first run, with Barracks cleared.  It took me 17 hunts to charge, (only 16 sand for the Acolyte, though...last hunt doesn't count!)  and 26 to drain.  Honestly, this is pretty close to my average run.  I've seen some people go as low as 14 to charge, but most people are around 18-22.

I've tracked a few of my runs will be tracked here:    http://tinyurl.com/MHAcolyteHunting

Welcome to Silvermane's Bristle Woods Guide.  Just click the section below to jump straight to an area.